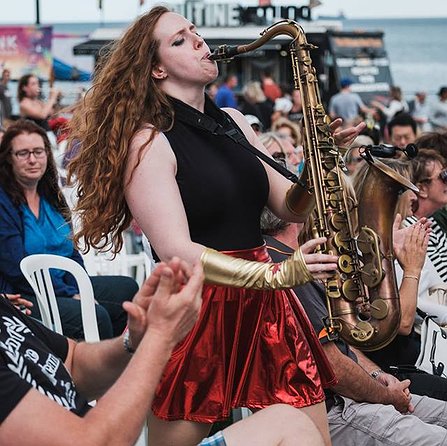 Originally from Edmonton, Alberta, she earned a diploma in performance from Grant MacEwan University in 2008 and was recognized with the Rawlco Radio award and CARAS Fred Sherrat award. Shannon has an extensive background in classical viola study and played in the Edmonton Youth Orchestra for several years. She was one of the original members of Edmonton’s Kamara String Quartet.

In 2011, Shannon completed her Bachelor of Music in jazz performance at the University of Toronto, where she won the Alumni Music Association award for two consecutive years and studied saxophone with Alex Dean.

As a singer, Shannon has been contributing her voice to Toronto’s creative music and new music communities for several years. Her music, influenced by a background of training in both jazz and classical music (as well as a life-long love of pop music), has been performed in the Spectrum Music series, and commissioned by Toronto musicians from both communities.

Shannon has released two records as a solo artist. She is a member of Toronto’s most fierce Latin-Soul band “The Achromatics” and "Dialectica" an all-female saxophone quartet, who released records in 2017 and 2018 respectively. When she isn't a starving artist, she's an entertainer with Groove Marmalade and the tribute shows of JV Music.

Shannon loves to share her passion and expertise of music through teaching. She believes that good music can connect people by provoking empathy, insight, and catharsis.