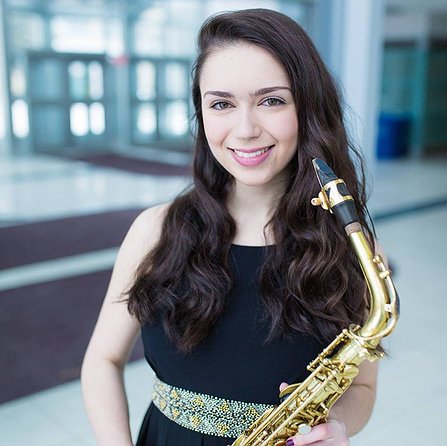 Samantha has recently completed her Master of Music degree in Saxophone Performance at the University of Toronto. She is a member of Dr. Wallace Halladay's studio. Samantha began playing piano at the age of 5 and saxophone at the age of 8. She has completed her Bachelor of Music degree with Honours from Memorial University of Newfoundland, studying with Paul Bendzsa and Dr. Christine Carter.

For five years, Samantha has attended the New York Summer Music Festival where she has had the privilege of studying with Dr. Paul Cohen, who currently teaches at Manhattan School of Music. Samantha has won several awards, including Junior (2009) and Senior (2014) Instrumental Rose Bowls at the Kiwanis Music Festival in St. John's, Newfoundland.

In 2014, Samantha had the privilege to represent Newfoundland and Labrador at the National Music Festival in Kelowna, British Columbia. She is also the recipient of several awards from Music Fest Canada, including the Ricco Golden Reed Award for most outstanding performer on a reed instrument (2010), and the Slaight Music Scholarship for outstanding musicianship (2012).

Samantha began teaching saxophone lessons in 2012 in St. John's, Newfoundland. She is comfortable teaching students from beginner to advanced levels.

I believe it is important for a teacher to be organized, to establish goals and objectives, and to involve parents that are supportive of their child's musical progress.

The success of a musician's experience in performance is dependent on having the right relationship with his or her teacher. Having been enrolled in music lessons from the age of 5 and studying with several amazing teachers, I understand how important the teacher-student connection is. It can be extremely effective in stimulating student motivation and progress. I believe it is important to pick appropriate repertoire that reflects the abilities of the student, yet challenges the student's musical interests. I also believe that it is important for a musician/teacher to be organized, to establish goals and objectives, and to involve parents that are supportive of their child's musical progress.