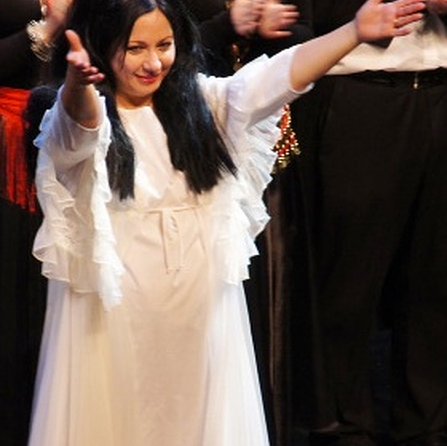 Mirela is a lyric Soprano specializing in Bel Canto repertoire. She has completed her Bachelor's degree (B.Mus) in vocal performance from the University and Academy of Fine Arts in Tirana Albania where she also taught voice.

Mirela was the winner of the First Prize in the Umberto Giordano International Vocal Competition in the city of Lucera Italy. She has performed operatic roles such as Donna Anna and Despina in Mozart's Don Giovanni and Cosi Fan Tutte, Violetta and Gilda in Verdi's La Traviata and Rigoletto, Tosca in Puccini's La Boheme, and Michaela in Bizet's Carmen, just to name a few. Mirela has performed in countries such as France, Spain, Italy, the U.K, Holland, Austria, Scotland Switzerland, Greece, Poland, Hungary, Romania, Libya, Czechoslovakis, England, the U.S.A. and Canada.

Ultimately, singers need to rely on body memory. They need to stop thinking or over thinking in order to allow the voice to naturally do what it was intended to do.

"Sensation is everything when singing. One must be willing to let go completely in order to allow the body to perform naturally as it should. Singing is all about breathing. When we speak, most of us don't think about breathing. This is something we do naturally. Most vocalists have heard the expression 'sing like you talk', one time or another. Singing should be just as natural as speaking. Ultimately, singers need to rely on body memory. They need to stop thinking or over thinking in order to allow the voice to naturally do what it was intended to do, and that is to sing or speak comfortably."