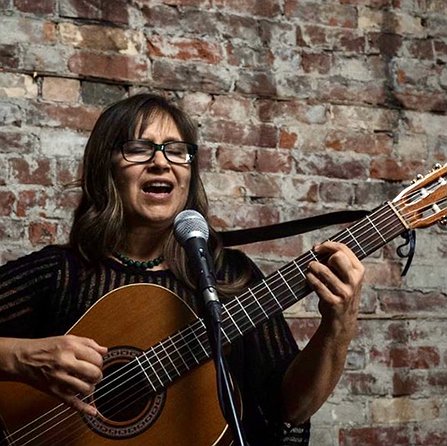 Dr. Andrea Kuzmich has completed a PhD in Ethnomusicology, MA (Master of Arts) in Ethnomusicology, and a BFA (Bachelor of Fine Arts) in Music from York University in Toronto. Andrea is a versatile and award-winning singer, teacher, ethnomusicologist, music facilitator and mother. Her eclectic musical activities defy her conventional classical beginnings where by the age of 16 she was a cellist with the McMaster Symphony and had performed in four different Canadian Opera Company productions. Andrea has also: fronted an alternative pop band; won The Ella Fitzgerald Award for Performance in Vocal Jazz and The St. Thyagaraja Award for Performance in South Indian Singing and Drumming; sung in a Congolese Gospel Choir; studied Balkan folk music; co-led classes and kids’ camps on West African drumming; performed in Big Bands, small jazz combos, as well as contemporary new music ensembles; recorded film soundtracks; taken a leading role in the practice of ridnyj holos (Ukrainian traditional singing) in Canada through FolkCamp.ca; become Canada’s foremost practitioner and academic of the UNESCO proclaimed intangible heritage Georgian polyphony; led camps and workshops for kids and adults in composition and songwriting, blues, bluegrass; and body percussion.

Andrea has taught music or has been a visiting guest artist at the Toronto District School Board, for body percussion (2020); York University, for private voice and musicianship and led the World Music Chorus (2006-2012); the University of Toronto, with the vocal jazz ensemble (2012), Viva Youth Singers (2011); and Young Voices of Toronto, formerly High Park Choir (2016).

Andrea’s eclectic musical practices allow her to jump from styles and genres, where she feels equally comfortable in jazz, blues, pop, rock, world music and classical.

Andrea has a holistic approach to teaching, with a focus on unearthing the natural musician through a combination of creative play and disciplined skill development. She can draw upon an arsenal of technical exercises that help with tone production, and a sense of harmony and rhythm; and, depending on the student’s orientation, can use these exercises in a regimented way, embed them within the repertoire that the student is inspired by, and/or apply them in fun and interactive call and response types of exercises. She has been successfully using this technique with children as young as 5 and adults as old as 80!

Andrea’s eclectic musical practices allow her to jump from styles and genres, where she feels equally comfortable in jazz, blues, pop, rock, world music and classical. She can also teach beginner guitar, ukulele, piano, theory, musicianship, body percussion and songwriting; or can supplement vocal teaching with these.