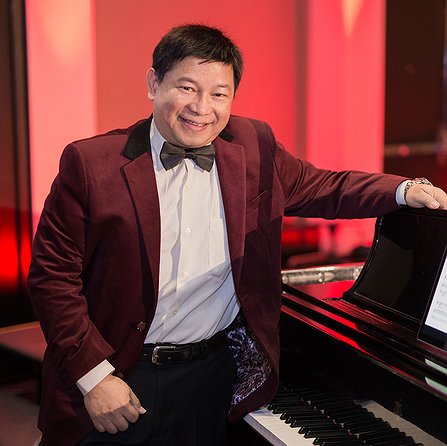 Anton has a Bachelor of Music degree majoring in Composition and Piano from the University of the Philippines College of Music. He has taught piano and voice for more than 15 years in Dubai, United Arab Emirates. Anton has prepared his piano students for the bi-annual Trinity College London (UK) examinations in Theory and Practical Solo Piano, earning for most of them Merit and Distinction marks.

Prior to this, Anton organized his family into a band. They became widely known as the "VN's Octave," so called as they were four sons and four daughters in the family (what's more, in '4/4 time'). Anton taught his siblings the different instruments and ultimately they performed over 500 concerts all over the Philippines, including TV appearances and international stints, as musical director. His mother is a seasoned concert pianist (and medical doctor), the youngest-ever graduate of the University of Santo Tomas Conservatory of Music who presented her graduation recital at the age of fifteen with a 100-piece orchestra. His father is an accomplished tenor.

Anton trained and led his college choir at the University of San Agustin in Iloilo City into winning numerous championships in various choral competitions. He went on into training solo singers, many of whom won in international singing contests like the World Championships of Performing Arts in Hollywood USA, the TFC Pop Star Middle East Championship, and TV-5′s Talentadong Pinoy vocal competition for the Middle East.

He was musical director of the play "Man of La Mancha" staged in Iloilo City and Manila, with a cast made entirely of women.

Anton formed, managed and performed with "The Aquatones," a group of talented singers and instrumentalists in the United Arab Emirates, taking them into local and international gigs and hotel residencies.

He has just recently moved to Toronto for good and is now committed to the implementation of his successful teaching techniques here. Anton is the owner of the music studio 88 Piano Keys located in North York where he teaches piano and singing.

No other living creature can make music the way humans do. It is with this truth that I seek to tap into the vast musical resources a human being possesses.

"All music originates from the human soul. No other living creature can make music the way humans do. It is with this truth that I seek to tap into the vast musical resources a human being possesses. How to get brain waves transformed into tuneful sound waves, that is my goal. Not only that. More than anything, I strive for excellence in my students. I believe that music can be taught to anyone who desires enough to learn it. Music is everywhere—I believe that one should not only take it; one should also make it.

I believe that a typical musician's world is five times more exciting than a typical music lover's world:
Musicians can accurately interpret music produced in, and by, their own bodies. Musicians listen to music and can invent versions of it in their minds. Musicians talk among themselves in a dimension mere music lovers do not experience. Musicians unknowingly use their talent to make more friends and admirers. Musicians trigger happiness in other people (e.g., in groups of music lovers) with the music they make."