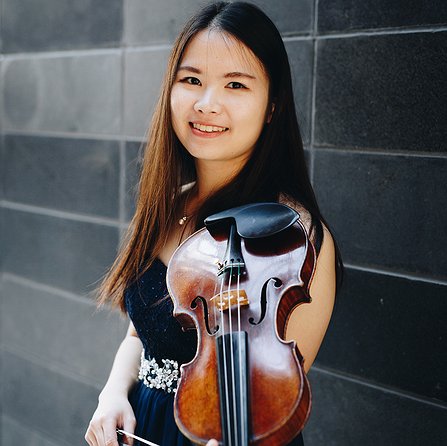 A winner of the Galimir Chamber Music Competition in 2017, Taiwanese violinist Yung-Yu Lin is pursuing a Doctor of Musical Arts (DMA) degree at the University of Toronto’s Faculty of Music, under the tutelage of Timothy Ying. She earned her Master of Music degree in violin performance from Indiana University’s Jacobs School of Music (U.S.A) and Bachelor of Music degree from the National Taiwan Normal University, where she studied with Joseph Swensen, Yao-Tsu Lu, and Wei-Ting Fu. Yung-Yu has appeared as a soloist, chamber musician, and concertmaster in Asia and North America. She was a finalist of the Arapahoe Philharmonic Concerto Competition in 2014. She often collaborates with modern composers from Taiwan, U.S.A, and Canada, performing in the national premiere of the opera “Luci Mie Traditrici” by the Italian composer Salvatore Sciarrino in Toronto, as well as “Double Exposure”, an experimental program between composers and film directors at the Indiana University in Bloomington, Indiana, U.S.A.

While pursuing her Master's degree at Indiana University, she received formal pedagogical training with Mimi Zweig. Yung-Yu was an adjunct instructor at the Fairview Violin Project in 2015 and a teaching assistant at Indiana University’s String Academy from 2014 to 2015. She was invited to the summer violin program at Falls Baptist College in Milwaukee (U.S.A) in summer 2015, supervised by Elizabeth Zempel. In 2013 and 2014, she was a private violin teacher and piano accompanist at University of Wyoming’s String Project in Laramie, Wyoming (U.S.A).

No matter where you are in your life, it is never too late, because you always have the potential to achieve something with the right method.

It fascinates me to see how students can pick up things quickly with proper guidance. I believe that a good learning experience is based on healthy communication between student, parent, and teacher, or student and teacher for adults, as well as the time commitment to practice. I always enjoy the journey assisting students to thrive and helping them to explore music. No matter where you are in your life, it is never too late, because you always have the potential to achieve something with the right method.