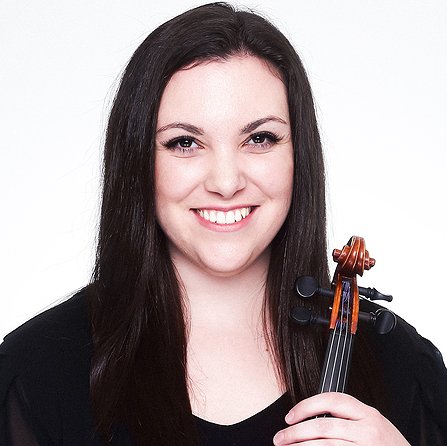 With notable accomplishments as a solo violinist, chamber musician, and fiddler, Toronto-based musician Terri Croft has been performing for audiences across North America since her beginnings as a prodigiously talented fiddler at the age of seven. She holds a Bachelor of Music from Dalhousie University, and a Master of Music from the Cleveland Institute of Music, and an Artist Diploma from the Glenn Gould School of the Royal Conservatory of Music. Her main teachers were Paul Kantor, Jaime Laredo, Barry Shiffman and Philippe Djokic. Chamber music is her passion, and in 2015, she was a member of winning groups in both the duo and ensemble categories at the Glenn Gould School Chamber Music Competition. In 2011 her piano trio, Trio Benterria, won the chamber music category at the National Music Festival. She has played in masterclasses with the Juilliard Quartet, Peter Salaff of the Cleveland Quartet, and Vivian Weilerstein. Terri has performed the concerti of Bach, Brahms, Mendelssohn and Vivaldi, with orchestras such as Nova Sinfonia, the Dalhousie Orchestra, and the NB Youth Orchestra. She still plays fiddle music, and in 2014 won the Northern Ontario Fiddle Championship. She is a dedicated teacher with an ever-growing studio! Terri teaches violin and fiddle lessons at Neighbour Note.

I believe in a positive teaching approach which fosters a love of playing music.

I believe in a positive approach which fosters a love of playing music. Since I play so many genres of music, I'm very flexible with regard to what music the student wants to learn. My lessons are tailored to each individual student, adapting constantly to their learning style, energy levels and strengths. I aim to help students discover the joy of playing music!