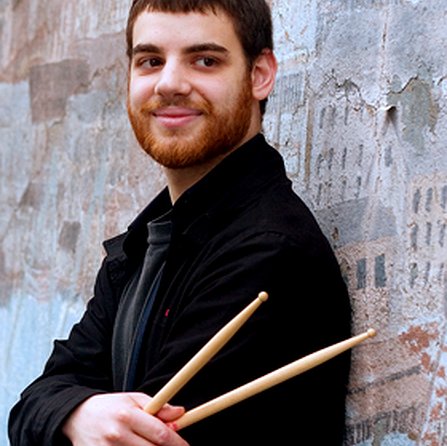 Newfoundland native Simon Miminis began drumming at the age of 11. His interest in music quickly developed as he studied under many prominent local musicians and performed with a variety of established local and traveling artists including Pamela Morgan, Dave Panting, Patrick Boyle, Curtis Andrews and Margaret Stowe. He eventually chose to pursue music professionally and moved to Toronto where he studied composition, recording and performance under some of Canada's greatest muscial talents including Mark Kelso, Paul DeLong, Larnell Lewis, Chendy Leon, Jim McGrath, Andy Ballantyne, John Macleod and Steve Bellamy to name just a few. Simon has since established himself as an emerging film composer and drummer/percussionist in Canada's competitive and fast paced music industry.

Currently, Simon is pursuing a Masters in Music Composition at York University and is a recent Honors graduate from Humber College's prestigious School of Creative and Performing Arts graduating with a Bachelor of Music focused in arranging and composition. He performs regularly as a freelance musician with many professional artists and ensembles spanning various genres as well as for film and TV. He has performed at many major music festivals in Canada and has received a number of grants for travel and recording.

As a composer, Simon has been involved in scoring dozens of films and commercial projects spanning a variety of genres, many of which have screened at established international film festivals such as the Toronto International Film Festival (TIFF), Hot Docs, The Nickel Independent Film Festival and abroad in countries including the Netherlands and Australia. He has received several nominations and awards for his scores including a nomination from the Toronto Youth Shorts Film Festival Awards for best sound design, the Duke Ellington Society Scholarship for excellence in composition and most recently an Arts & Letters Award from the Provincial Government of Newfoundland and Labrador. He is a member of the Screen Composers Guild Of Canada (SCGC) and is currently working with film professionals within Toronto and St. John, two areas between which he shares most of his time.

Aside from performance and composition, Simon is also an active recording engineer and is presently operating his own recording and production studio Dub-S Jam Box from which he is composing, arranging, recording, mixing and producing numerous film scores as well as albums, EPs and demos for various artists, many of which are to be released this coming year.

As an educator, Simon has taught in several established studios in Toronto and Newfoundland as well as his own studio for the past 6 years. He has been teaching drumming and percussion as an endorsed PDT instructor by Vic Firth as well as theory, composition, music recording and production.

"My basic teaching philosophy has been influenced by the 4 stages of competence:

I try to guide my students through each of these phases of competence in order to reach their goals.

To do this, I prefer providing a practical approach to teaching, one that combines guidance with self-direction. This approach provides students the ability to realize the importance of their own musical goals and create their own voice on the instrument. Learning exercises and techniques are one aspect to teaching, but giving the student the ability to internalize these techniques to the point of unconscious competence while uniquely implementing them is another.

In crafting a lesson plan, I prefer to allow the student's interests to dictate what course the lessons will take. This allows me to approach the most relevant weaknesses in their playing while allowing them to grow in a direction that will inspire their own creativity.