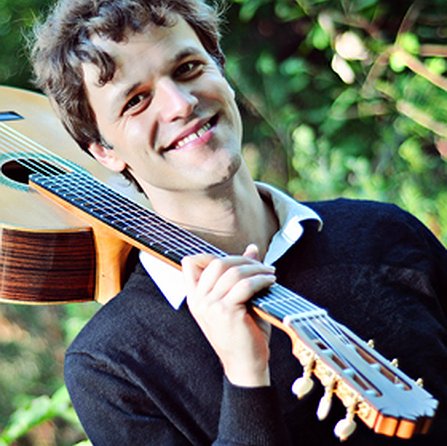 Born in Winnipeg, Manitoba, John Testar began his classical guitar studies under the tutelage of the soloist, composer and teacher, Dr. Ian Hodges. John then continued his studies with soloist, recording engineer, and teacher, Michael Daher. After moving from Winnipeg to Ottawa, Ontario, John began his Bachelor of Music degree in Ottawa, under the guidance of the renowned pedagogue, performer and composer, Patrick Roux. Testar also completed his Master of Music degree with Roux as his teacher, and was nominated, by the University of Ottawa's Faculty of Music, to play a solo concert at the National Arts Center's 4th stage.

John has been the recipient of several awards for both his playing and academic achievements, including a 2010 Ontario Graduate Scholarship, the 2008 Couleur F.M Scholarship for highest standing in the guitar faculty at the University of Ottawa as well as routinely receiving the Domaine Forget Scholarship to attend the two-week music academy in St-Irenée, Québec.

John has played in several masterclasses for master guitarists from around the world, some of which include, Odair Assad (Brazil), Gabriel Bianco (France), Benjamin Verdery (U.S), Marco Feri (Slovenia), Pepe Romero (U.S.), Pavel Steidl (Czech Rep.), Fabio Zanon (Brazil) and many others. Some of the most crucial lessons learned in these classes for John have included the importance of breathing and healthy attitudes toward playing music, the state of mind necessary for successful performance, and of course the love and enjoyment of the music to be paramount in the artistic experience.

Teacher and student are part of a mentorship, where both parties are always on the path of growth and fulfillment.

"Teacher and student are part of a mentorship," says John, "where both parties are always on the path of growth and fulfillment."