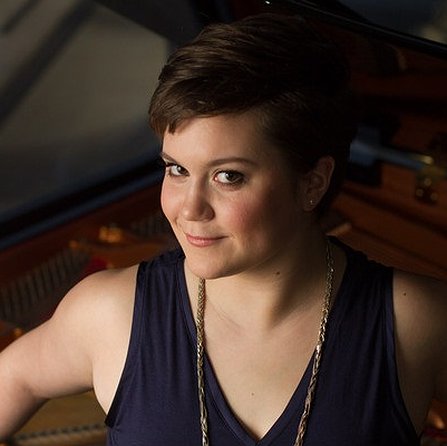 Jacqueline Mokrzewski has been behind the piano since the age of three. She began her studies with Paul Coates and competed in various Kiwanis music festivals throughout Southwestern Ontario. When she was eight she competed in the Milosz Magin International Piano Competition, finishing in the top ten of an 8-12 age group. Jacqueline began studying with Dr. Douglas Humphreys of the Eastman School of Music at age nine, and in 2003 she competed in the New York Music Teachers Association Piano Competition where she received 1st prize.  In the spring of 2005 Jacqueline received the SOCAN prize for the best played Canadian work at the Toronto Symphony Orchestra Competition. In both 2007 and 2008 Jacqueline succeeded in competing in the finals of the Canadian Music Competition, finishing with 2nd prize in all of Canada for her age group. Her first competitive orchestral accomplishment was the winning of the 3rd Toronto Sinfonietta Orchestra Competition with whom she later performed Tchaikovsky’s piano concerto. In 2010 she was a semi-finalist in the 3rd Canadian Chopin Competition.  During her studies at the University of Toronto, Jacqueline competed in the University of Toronto Symphony Orchestra (UTSO) Concerto Competition where she performed Liszt’s E flat major Piano Concerto and won the opportunity to perform this concerto with the UTSO. In 2016, Jacqueline achieved a Masters degree (M.Mus.) in Piano Performance at the University of Toronto under the tutelage of Professor Marietta Orlov.

Likewise, Jacqueline is an active collaborative pianist. She has had the honour of performing with the Toronto Symphony Youth Orchestra (TSYO), Bel Canto Singers, Hart House Chorus, and the North Lakeshore Chorus with whom she has travelled to England, France, Belgium, and Newfoundland. In the summer of 2018, Jacqueline will perform throughout Europe with the North Lakeshore Chorus to commemorate the end of WW1.

Though classically trained, Jacqueline is passionate about many types of music. Currently, she is the keyboardist of the alternative rock band Bare Bones. Alongside Corbin Hawkins and Nick Mokrzewski, Jacqueline has played many venues throughout Southwestern Ontario.

Jacqueline has been a private piano teacher since 2009. She enjoys teaching music and working with young minds. In the spring of 2018, Miss Mokrzewski will adjudicate intermediate piano at the Davenport Festival of Music. Jacqueline teaches piano lessons here at Neighbour Note.