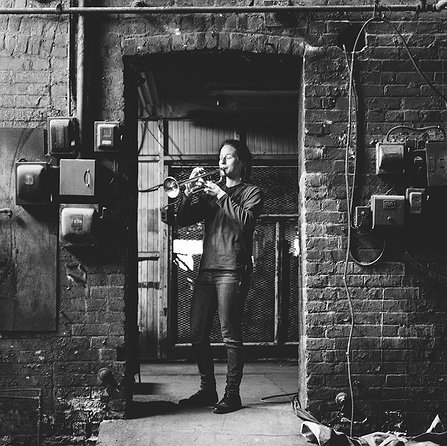 Emma is from Salt Spring Island, BC, where she began studying trumpet with Dawn Hage. She went on to obtain a Bachelor of Music from McGill University, where she studied with Russell DeVuyst and Edward Carroll. Now based in Toronto, Emma is a member of the Vox Aeris Brass Trio, and The Achromatics, a nine-person Pop/Latin superband. She also freelances with several chamber, pop, and orchestral ensembles in the GTA, and has a particular affection for piccolo trumpet. She arranges music (from Brian Eno to RJD2) in various instrumental combinations. She is a Director of Music at Our Lady of Sorrows Church, teaches piano at Northmount School, and often works with amateur choristers.

When she was eight, Emma Rowlandson-O'Hara picked up the trumpet because of a children’s novel she’d read: E.B. White’s The Trumpet of the Swan, in which the swan protagonist, Louis, learns trumpet in order to communicate with his beloved, Serena. As Emma has made her way from B.C. to Ontario, she has discovered that she still plays for much the same reason: to imitate the temperament of the human voice. Her experiments with free improvisation, literature, and winter cycling allow her to constantly explore form and value to new depths.

I aim to foster an awareness of learning with the music. In this way, technique and accomplishments are driven by the context of a relationship.

The first thing I do as a teacher is to introduce my students to the hypothesis of beauty.  I begin with a piece, or a technique, that has moved me, and what this means for my students is that we are not starting with something arbitrary, but with an invitation. The hypothesis that this piece has something to offer me (and vice versa) reworks the “practice” mentality, where we look at music as a puzzle to be solved, but once perfected it is done. This mentality can be stimulating and fascinating, but on its own, ultimately exhausting and isolating. I aim to foster an awareness of learning with the music. In this way, technique and accomplishments are driven by the context of a relationship.

Practically, this doesn’t mean that we’re all interested in the same sort of music; we may begin with my suggestion, but the goal is to develop a sensitivity in the student to what corresponds to him or her, and this is not limited to music! When I was in high school, our musical tastes would often be criticized because “you only listen to that because your friends like it!” Conversely, this now seems, to me, to be the most beautiful example of how to listen to music. I want to love what my friend loves; this is what I mean by learning in relationship.

I’ve said very little about the trumpet in particular, and this is partially because the teacher-student relationship depends primarily on the above, and not whether we both think it’s cool that three valves can produce so many notes, but this latter is also of great importance. Fergus McWilliam, hornist in the Berlin Philharmonic, and author of Blow Your OWN Horn! debunks the “politically correct” statement that “I am a musician first, and a hornist second.” If you are interested enough in the trumpet to play it, be amazed! I know I still am.