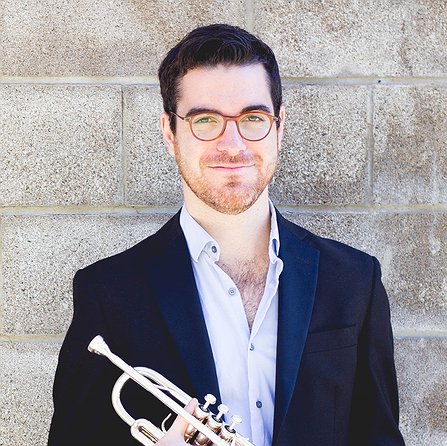 Dylan Rook Maddix is the founder and artistic director of the Toronto Winds, host of the podcast The Band Room, and maintains an active career as a sought-after conductor, performer, clinician, and adjudicator.

As a performer Dylan is active as a freelance trumpet player and chamber musician in Toronto, ON. He is the newest member of the Hogtown Brass Quintet, founding-member of the Vox Aeris Trio and past member of the award-winning Weston Silver Band. The Elysian Duo is Dylan's latest musical endeavour, an innovative chamber duo he co-founded with classical guitarist James Renwick. The Elysian Duo is breaking new ground through diverse programming, community engagement and the commissioning of new works.

A prizewinner at the 2011 & 2014 National Music Festivals, Dylan has been a featured soloist with the Prince Edward Island Symphony, Weston Silver Band, Greater Moncton Chorale and Orchestra, and Strathgartney Chamber Orchestra. His musicality has led him to numerous festivals in Canada and the United States including the Scotia Festival of Music, Charlottetown Festival, North American Brass Band Championships, Indian River Music Festival, Bathurst Chamber Music Festival, Music Fest Canada and the Luminato Festival. He holds a Master of Music degree from the University of Toronto and a Bachelor of Music from Mount Allison University. Dylan teaches trumpet lessons at Neighbour Note.

I cater to the individual student's needs and passions, providing a custom lesson for each of my students.

I believe everyone learns differently and I cater to many different learning styles and abilities. I love to teach and to inspire my love for trumpet and music in others. If you wish to become a professional musician, have fun learning a new instrument or just looking for a new hobby, I am here to support you. I cater to the individual student's needs and passions, providing a custom lesson for each of my students. All of us have the capability to improve, but with guidance and mentor ship, that improvement can be almost guaranteed.