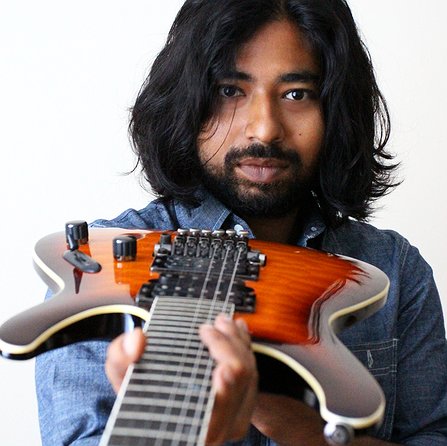 Guitarist, teacher, composer, and arranger Arjyo Bala has a unique approach to playing and teaching the guitar. His original style of playing and composing comes from his concept of Unification – the blending of Indian classical music melodies with western genres, which he has been developing for many years now. His aim is to bring forth a new style in Western Music.

Arjyo is a master in the virtuosic style of electric guitar playing and is most interested in genres like progressive rock, fusion, heavy metal, classic rock, blues and ballads. His musical influences include guitarists like Joe Satriani, Guthrie Govan, John Petrucci, Marco Sfogli and Paul Gilbert to name a few. He led his own instrumental Ragarock band in his hometown of Calcutta, India for four years before he moved to Toronto, where he completed his Bachelor of Fine Art degree in music at York University. Arjyo has already released a debut EP, titled “Arcane Accord”, available on all major digital distributors and is in the process of making a second album.

Arjyo has taught students of various skills and ages, each with their own musical tastes. He has guided them all to become good musicians in their own way. His teaching style is easy going and he creates a fun, safe learning environment, where students are encouraged to make mistakes and learn from them, ask questions and play freely. Arjyo looks forward to the success of his students and  even though he is in Canada now, he still keeps in touch with his past pupils from other parts of the world.

To instill a passion for the guitar in students. To use the guitar as an extension of one's own emotions. Above all, to maintain humility because that is the hallmark of a great musician and person.

Arjyo's teaching philosophy is threefold: To instill a passion for the guitar in students. To use the guitar as an extension of one's own emotions. Above all, to maintain humility because that is the hallmark of a great musician and person.