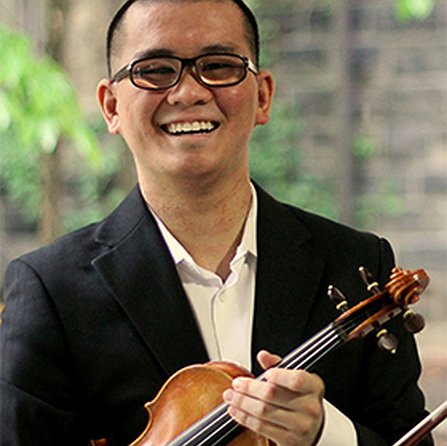 Stelth Ng, a native of Toronto, began playing the piano at age four and violin at age five. He holds the Royal Conservatory of Music ARCT Diploma for both instruments. He owes his early musical training to Nancy Hou and Praise Lam. Later principal teachers include Jacques Israelievitch, Timothy Ying, Yosuke Kawasaki, and Roland and Almita Vamos.

Stelth has appeared as a guest on CBC Radio One 91.5 FM with Alan Neal and has performed regularly with the Ottawa Symphony Orchestra, Chautauqua Music School Festival Orchestra, and the National Youth Orchestra of Canada. He was awarded the Lorand Fenyves String Scholarship and the John Moskalyk Memorial Prize for his undergraduate work at the University of Toronto. He is also the recipient of the Canadian National Institute for the Blind's Jazz FM Annual Scholarship for visually impaired musicians and the winner of the Mississauga Youth Orchestra, Chinese Artists of Toronto Philharmonic, and the University of Ottawa's 2014 Concerto Competition.

An avid chamber musician, Stelth was the founding member and first violinist of the Grigori String Quartet, which was awarded First Prize at the 2013 Felix Galimir Chamber Competition at the University of Toronto. In addition, he also co-founded and led as first violinist of the Sipe Piano Quintet, which was invited to perform at the National Arts Centre's 2014 Fourth Stage Concert Series.

Stelth has performed regularly at outreach programs in the Greater Toronto Area as a violinist, including the University of Toronto Noon Concert Series, Music Mondays Concert Series, and the Arts and Letters Club with piano partner, Valentina Sadovski. He has also performed numerous concerts with pianist Judy Ginsburg as part of Ontario's Health Arts Society Concert Series and strives to connect music with the visually disabled through the Canadian National Institute for the Blind.

In addition, Stelth has worked closely with dance faculty and pianists at Canada's National Ballet School as a ballet accompanist, including private studies in improvisation with Rob Thaller, Craig Wingrove, and Principal Pianist, Marina Surgan. His numerous inter-arts collaborations at the Chautauqua Institution have included working with dancers and choreographers from top dance schools and companies in North America; including The School of American Ballet, Indiana University Ballet Theatre, The Rock School of Dance, Boston Ballet School, Charlotte Ballet, and San Francisco Ballet. His choreographic partnerships with the Chautauqua School of Dance were featured at the annual dance galas as chosen finalists every consecutive summer. In addition, he has recorded and produced numerous dance music videos in combination with classical ballet on the piano and violin.

Over the years, Stelth has accompanied vocalists, instrumentalists, and pianists, as well as at the Canadian Music Competition National Finals. He has taught piano and violin privately for over ten years, and has coordinated and supervised several university violin education courses at the graduate level.

Stelth currently plays on a 1900 Gaetano Sgarabotto Violin on generous loan from the Rachel Barton Pine Foundation as a Young Artist Recipient. Stelth can be heard performing on this violin in the video: Lotus Land which is a collaboration with the Rock School of Dance where Stelth recorded both the piano and violin parts. You can also hear Stelth perform piano in his music video production of The Lark. Click here to read more about Stelth.

Lessons can be offered in English, French, or Cantonese. Stelth teaches piano and violin lessons here at Neighbour Note.

I strongly believe that every musician and student is unique; some learn more visually, and others by a more hands-on approach, so I approach every student in a different way that best accommodates their needs and preferences.

"Over the years of my musical education, I've learned that there is so much more to be gained from playing a musical instrument than just performing for others. Learning to play different instruments has revealed to me how physically and mentally rewarding it can be. While I focus strongly on technique, I also strive to demonstrate how simple, yet essential concepts such as breathing, posture, thought process, and experimentation can be applied not only in practicing and performing, but also to the every day activities we all take part in."